Astronomers announced today they’ve spotted the second-oldest object in the universe to date, a star-forming galaxy located 12.8 billion light-years away. Because astronomical observations act as a sort of time machine based on the speed of light, that means we’re seeing the region as it looked 12.8 billion years ago—less than a billion years after the Big Bang.

The discovery of the object, now being called G09 83808, is reported in a new paper published today in the journal Nature Astronomy. According to the research, that galaxy is producing about 380 suns’ worth of stars every year. But because it is so far away and the universe is expanding so quickly, we don’t see its light as we would if G09 83808 were right next to us.

Instead, the light appears to be stretched, the same way the siren of an ambulance speeding away becomes gradually lower-pitched as its sound waves stretch. In this case, the wavelength of the light is stretched and “shifted” towards the red part of the spectrum. Astronomers therefore call it an extremely high redshift, the second largest redshift discovered to date.

But scientists are convinced there are plenty more of these highly redshifted, distant objects out there waiting to be discovered. “This result is not a surprise, because this is what the [Large Millimeter Telescope, based in Chile and designed especially to spot extremely distant galaxies] was built to do, but we are very excited,” co-author Min Yun, an astronomer at the University of Massachusetts in Amherst, said in a press release. “These high redshift, very distant objects are a class of mythical beasts in astrophysics.” 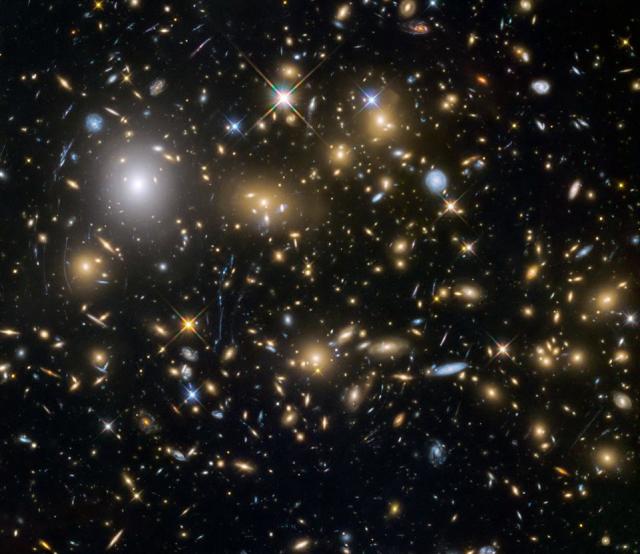 The new discovery also relied on tapping into gravitational lensing, a quirk of astronomical observations. Very large objects with very strong gravitational fields can act as magnifying glasses, bending light from more distant objects to make them easier to see. In the case of G09 83808, it appeared about 10 times brighter, thanks to a large galaxy lurking between it and Earth.

Intriguingly, the glimpse at G09 83808 suggests that the basic process of star formation has stayed more or less the same for almost 13 billion years.

And best of all, scientists think there should be plenty more of these discoveries to be made. The telescope that spotted G09 83808, the Large Millimeter Telescope, is currently being upgraded to become still more sensitive. That will mean astronomers can see fainter objects farther away. “They are essentially at the very edge of the universe,” Yun said in the press release. “Maybe they’ll start popping out.”

Am interested in science and philosophy as well as sports; cycling and tennis. Enjoy reading, writing, playing chess, collecting Spyderco knives and fountain pens.
View all posts by The Great One →
This entry was posted in Science and tagged Astronomers, Astronomy, Big Bang, Earth, Galaxies, Light, Outer Space, Science, Universe. Bookmark the permalink.