Captured ISIS Militants Describe the Execution of U.S.’s James Foley and Other Western Hostages as ‘Regrettable’

They want a fair trial, really?

I have a very simple comment to make regarding these two cockroaches. Get all the “intelligence” you can out of them. Then, fry them! TGO

Two captured Islamic State group (ISIS) militants who were allegedly part of a cell of British extremists nicknamed the Beatles have described the beheading of U.S. hostage James Foley and other western captives held by the group as “regrettable.”

Alexanda Kotey and El Shafee Elsheikh, from London, were captured by Kurdish forces in Syria in January. 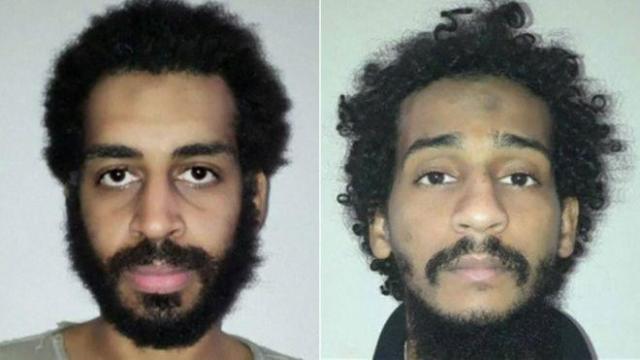 They are accused of being members of the Beatles cell, nicknamed because of their British accents, who U.S. officials say executed 27 western hostages and tortured many more.

Among those killed by the cell were U.S. journalists James Foley and Steven Sotloff and aid worker Peter Kassig.

Cell member Mohammed Emwazi, dubbed Jihadi John, appeared on camera beheading several hostages in a series of horrific propaganda videos distributed by ISIS in 2014. He was killed in a drone strike in 2015.

Aine Davis, a fourth member of the cell, was jailed in Turkey last year.

In an interview with the Associated Press from their prison in northern Syria, the pair complained that they would not get a fair trial as they had been stripped of their U.K. citizenship.

Kotey told the Associated Press that he “didn’t see any benefit” to the killings.

“It was something that was regrettable,” he said.

He also said many people in IS would have opposed the murders “on the grounds that there is probably more benefit in them being political prisoners.”

Elsheikh described the killings as a “mistake” that might not have been justified. But, he said, they were in retaliation for killings of civilians by the United States-led coalition fighting ISIS.

Diane Foley, mother of executed captive James Foley, said she didn’t care about their opinions and doubted the sincerity of what they said.

“I am interested in them being held accountable for their horrific crimes and right now, they look like they’re on vacation,” she told BBC Radio 4’s Today program.

“I know it’s complicated, but if someone doesn’t take the leadership and take them to trial I fear they’ll get away.”

In a statement on Saturday the U.K’s Foreign Office said: “We do not comment on individual cases, but we are working closely with partners to ensure that justice is served.

“We continue to work extremely closely with the US government on this issue, sharing our views, as we do on a range of national security issues and in the context of our joint determination to tackle international terrorism and combat violent extremism.”

This article was first written by Newsweek

Am interested in science and philosophy as well as sports; cycling and tennis. Enjoy reading, writing, playing chess, collecting Spyderco knives and fountain pens.
View all posts by The Great One →
This entry was posted in General Discussion and tagged Beatles, IS, ISIS, Islam, James Foley, Muslims, Peter Kassig, Seven Sotloff, Syria. Bookmark the permalink.