I understand that there are allegations from an individual who wants to remain anonymous of course, that Brett Kavanaugh masturbated while in fifth grade!!!

Just when we thought that democrats couldn’t stoop any lower, they demonstrate the scum that they are with this desperation move to postpone this man’s nomination.

But that’s ok, sooner or later there will be a democrat in the White House, and that will be fun to watch. TGO

Refer to story below. Source: People

Sen. Dianne Feinstein has sent a letter regarding sexual misconduct allegations against Brett Kavanaugh — President Trump’s contentious Supreme Court nominee — to federal investigators, according to a report from the New York Times.

Feinstein, who is the senior Democrat on the Senate Judiciary Committee — which is responsible for upholding or rejecting Kavanaugh’s nomination — sent the letter on Thursday, after informing her fellow Democrats on the Judiciary Committee about its contents the previous day, the newspaper reported.

However, none of her colleagues have actually seen the letter, according to Politico.

The letter allegedly contains information regarding “possible sexual misconduct between Judge Kavanaugh and a woman when they were both in high school,” two officials familiar with the situation told the Times.

While the Californian senator went on to confirm that she had “referred the matter to federal investigative authorities,” she declined to comment on the contents of the letter.

“I have received information from an individual concerning the nomination of Brett Kavanaugh to the Supreme Court,” she wrote in a statement. “That individual strongly requested confidentiality, declined to come forward or press the matter further, and I have honored that decision.” 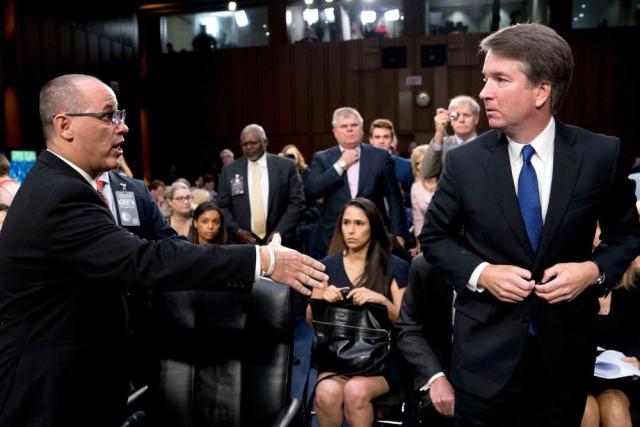 The White House went on to claim that the letter was merely an “11th hour attempt to delay” Kavanaugh’s nomination, according to a statement provided to PEOPLE.

“Throughout his confirmation process, Judge Kavanaugh has had 65 meetings with senators — including with Senator Feinstein — sat through over 30 hours of testimony, addressed over 2,000 questions in a public setting and additional questions in a confidential session. Not until the eve of his confirmation has Senator Feinstein or anyone raised the specter of new ‘information’ about him,” White House spokeswoman Kerri Kupec said.

According to the Times, Feinstein first received the letter this summer from Anna Eshoo — a U.S. Representative and fellow Californian Democrat — as the letter was initially sent to Eshoo’s office.

Kupec went on to accuse Senate Democratic Leader Chuck Schumer of playing games to hold up Kavanaugh’s confirmation to the high court.

“Senator Schumer promised to ‘oppose Judge Kavanaugh’s nomination with everything I have,’ and it appears he is delivering with this 11th hour attempt to delay his confirmation,” Kupec added in the statement.

The White House did not immediately respond to PEOPLE’s request for comment.

News of the letter came just one day after the committee agreed to vote on Kavanaugh’s nomination on September 20. On the same day, a motion backed by Democrats to release documents related to Kavanaugh’s time in the George W. Bush administration was blocked, according to CNN.

If approved by the Senate, Kavanaugh, 53, who currently serves as a judge on the U.S. Court of Appeals for the District of Columbia Circuit, would take the seat of Justice Anthony Kennedy following his retirement from the bench.

Opponents of Trump’s choice for a lifetime appointment to the high court see Kavanaugh as a threat to the 1973 Roe v. Wade decision, which legalized abortion across the U.S. Though Kavanaugh declined in hearings last week to say if he would reverse Roe v. Wade, Trump vowed during his presidential campaign to only nominate “pro-life justices” who would vote to overturn the ruling if it made its way to the Supreme Court again.