207 dead, including several Americans, after explosions across Sri Lanka on Easter

Isn’t Islam a “wonderful” faith? Why yes it is say all of the Muslim apologists. They will argue that Islam is the religion of peace. That Muslims have been discriminated against and therefore this is their way of fighting back. They may also tell you that these acts of violence are only carried out by a few people. The only thing is, those “few” people never seem to run out!

Ilhan Omar and Rashida Tlaib, not to mention Linda Sarsour, are probably feeling no empathy for the dead and those they left behind.

Once again, more deaths in the name of God, and as usual, the DICK (pope) offers prayers. Tell us something we didn’t already know you moron! That’s all you ever offer, prayers. As if prayers mean anything or do anything! TGO 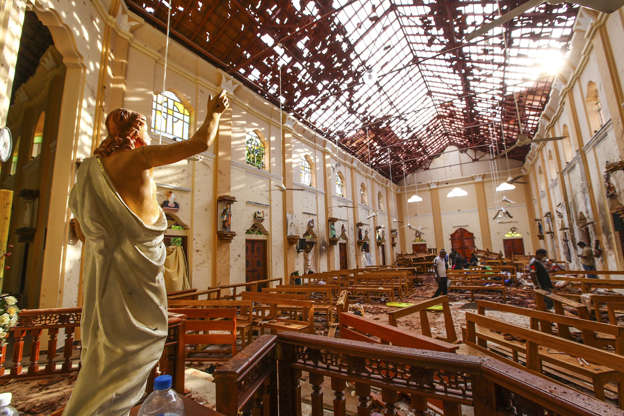 U.S. Secretary of State Mike Pompeo confirmed Sunday that “several U.S. citizens were among those killed.”

All of the foreigners died in attacks on hotels in Colombo, the capital of Sri Lanka, an island nation off the southern tip of India in the Indian Ocean, according to the officials.

President Donald Trump sent his condolences to the country in an early morning tweet from his Mar-a-Lago estate in Palm Beach, Florida, where he is spending the Easter holiday.

“The United States offers heartfelt condolences to the great people of Sri Lanka,” the president tweeted. “We stand ready to help!”

White House press secretary Sarah Sanders said in the statement that “the United States condemns in the strongest terms the outrageous terrorist attacks in Sri Lanka that have claimed so many precious lives on this Easter Sunday.”

“Our heartfelt condolences go out to the families of the more than 200 killed and hundreds of others wounded,” Sanders said in the statement. “We stand with the Sri Lankan government and people as they bring to justice the perpetrators of these despicable and senseless acts.”

Eight simultaneous explosions erupted about 8:45 a.m. local time. Video from inside the St. Sebastian’s Church in Negombo, a coastal city about 40 miles north of Colombo, showed the immediate aftermath a bombing there as worshipers who had just been praying for peace found themselves surrounded by devastation, death and chaos.

There were about 500 people at the Easter Mass at St. Sebastian when the explosion took place, according to officials from the church. Parishioners, many bleeding, scrambled to carry severely injured people from the church, which was littered with overturned chairs, shattered glass and debris that had fallen from the ceiling.

A statue in the sanctuary of Jesus Christ was left pockmarked and splashed with blood but remained standing.

St. Anthony’s Shrine, a Catholic church in Colombo, and Zion Church, in Batticaloa, were also attacked. Colombo is located on the western side of Sri Lanka, while Batticaloa is on the eastern shore about 200 miles from the capital.

Shangri-La Hotel, Cinnamon Grand Hotel and Kingsbury Hotel, all located in Colombo — and all popular with tourists — were targeted in the bombings. An explosion occurred near an overpass in the area of Dematagoda near Colombo, the Associated Press reported.

Hours after the initial bombings, a ninth explosion occurred at a guest house in Colombo that killed at least two people, according to police.

The wave of bombings came after the Sri Lanka police chief issued a nationwide alert 10 days ago that suicide bombers planned to attack “prominent churches,” according to multiple reports.

“Some intelligence officers were aware of this incidence. Therefore, there was a delay in action. What my father heard was also from an intelligence officer. Serious action need to be taken as to why this warning was ignored,” Harin Fernando, a member of parliament in Sri Lanka, tweeted Sunday and included a document he says is the security warning.

Pope Francis prays for the victim

Following Easter Mass in St. Peter’s Square at the Vatican, Pope Francis condemned the “cruel violence” that “have wrought grief and sorrow.”

“I wish to express my heartfelt closeness to the Christian community [of Sri Lanka], wounded as it was gathered in prayer, and to all the victims of such cruel violence,” Pope Francis said. “I entrust to the Lord all those who have tragically perished, and I pray for the injured and all those who suffer as a result of this tragic event.”

Officials who spoke to ABC News were able to confirm at least 24 people were killed at St. Anthony’s Church, 27 died at Batticaloa’s Zion Church and 81 have died at St. Sebastian Church.

The explosions were followed by the wail of sirens from emergency vehicles headed to the multiple bombing scenes.

Ruwan Gunasekara, a police spokesman, said that in addition to the 207 killed, approximately 450 people were injured, overwhelming hospitals throughout the island nation.

Another 37 people were pronounced dead at the Kalubowila, Batticaloa and Brown’s hospitals. Eighty-nine people were being treated at those medical centers, Gunaskekara said.

Authorities confirmed that three British citizens, in addition to the two with dual American citizenship, one Portuguese citizen, three Indian and two Turkish nationals were among the dead.

“It’s a very, very sad day for all of us. I wish to, therefore, express my deepest sorrow and sympathy to all those innocent families that have lost someone, and also to those who have been injured and rendered destitute,” Malcolm Ranjith, the archbishop of Colombo, said at a news conference. “I would like to call upon all to pray that all those who are injured may be healed soon and that all these families who lost someone may be consoled.

“I condemn to the utmost of my capacity this act that has caused so much death and suffering to the people,” Ranjith said. “I ask all us Sri Lankan people not to take the law into their own hands and to maintain peace and harmony in this country. And I also ask that all those who are able to donate blood in order to help these people who are injured, and then I also appeal to the doctors to please help us.”

Secretary of State Pompeo said the U.S. Embassy in Sri Lanka is working to provide assistance to American citizens affected by the attacks, including their families.

“These vile attacks are a stark reminder of why the United States remains resolved in our fight to defeat terrorism,” Pompeo said in his statement. “We stand with the Sri Lankan government and people as they confront violent extremism and have offered our assistance as they work to bring the perpetrators to justice.”

Buddhism is the most common religion in Sri Lanka. National Christian Evangelical Alliance of Sri-Lanka documented the growing number of attacks on Christians in 2018, saying there were 67 from January to September.

Gunasekara also said that multiple raids had been carried out as police worked to identify those responsible for the carnage.

Sri Lanka has been at times one of the most dangerous locations in the world for terrorist attacks. A civil war that raged for decades between the ruling government and the Liberation Tigers of Tamil Eelam — known colloquially as the Tamil Tigers or LTTE — officially ended in 2009, but some conflict has continued. As many as 100,000 people were killed in the civil war from 1982 to 2009, according to the U.N.

St. Sebastians Church An explosion rocked St. Sebastian’s Church in Negombo, Sri Lanka, on Sunday, April 21, 2019. The U.K. government warns travelers of the risks posed by those visiting the country.

“Terrorist attacks in Sri Lanka can’t be ruled out,” the government advises on its website. “Attacks could be indiscriminate, including in places visited by foreigners.”

The country was also divided by a constitutional crisis at the end of 2018 when Prime Minister Ranil Wickremesinghe was removed by the country’s president in October, only to be reinstated in December.

“I strongly condemn the cowardly attacks on our people today,” Wickremesinghe said in a tweet. “I call upon all Sri Lankans during this tragic time to remain united and strong. Please avoid propagating unverified reports and speculation. The government is taking immediate steps to contain this situation.”

Security was increased across Sri Lanka, including Colombo’s international airport. Authorities also imposed an indefinite nationwide curfew from 6 p.m. to 6 a.m. and temporarily blocked major social media and messaging services, including Facebook and WhatsApp, to curb what government officials described as misinformation from being spread.

The bombings sent shockwaves all the way to the United States, where security was bolstered at churches coast to coast.

In California, the Los Angeles Police Department boosted patrols around places of worship. New York Gov. Andrew Cuomo directed the State Police to increase security at churches and houses of worship across the state.

“New York grieves for the victims of the horrific attacks at churches and hotels in Sri Lanka on Easter Sunday,” Cuomo said in a statement. “On behalf of all New Yorkers, I extend my deepest condolences to the people of Sri Lanka, to the families who lost loved ones and to all those grieving around the world.

“In the wake of these despicable acts of violence and out of an abundance of caution, I am directing State Police to increase patrols around churches and houses of worship across the state today,” Cuomo said. “During these troubling times, we will not be intimidated by cowardly acts of violence and will continue to do everything in our power to ensure the safety of all New Yorkers.”

A U.S. intelligence bulletin issued last week and obtained by ABC News raised ongoing serious concerns that U.S. law enforcement generally has in anticipation of high-profile holidays or gatherings, specifically Easter, Passover and Ramadan. But the bulletin said there was no evidence of a confirmed attack planned in the United States or U.S. facilities elsewhere.

The Federal Bureau of Investigation, the National Counterterrorism Center and the Department of Homeland Security “are not aware of any specific, credible threats surrounding the upcoming religious holiday season, but note that previous attacks happened with little to no warning,” read the intelligence bulletin issued on Thursday.

“Religious holiday gatherings are an attractive target for HVEs [homegrown violent extremists] and domestic extremists because they offer an opportunity to capitalize on large crowds and increased symbolism of the target,” the bulletin reads.