The universe truly is fascinating. TGO

Refer to story below. Source: Mashable 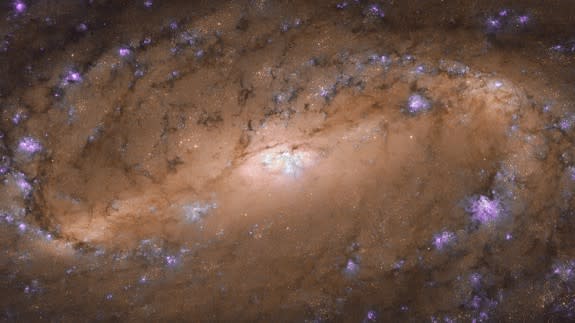 The Hubble telescope has captured a dazzling new photograph of a spiral galaxy, NGC 2903.

NGC 2903 is part of the constellation Leo, located roughly 30 million light-years from Earth. NASA used the powerful orbital telescope to explore it along with over 100 other disc galaxies in the region.

Spiral galaxies comprise the majority of galaxies in space at over 75 percent. Our own Milky Way galaxy was thought to be one until the 1960s, when it was reclassified as a barred spiral (a spiral galaxy with a distinct center bar in addition to spiral arms). Spiral galaxies’ arms are full of stars (and solar systems) as well as cosmic dust and gas bursts.

NASA has a particular fascination with black holes at the moment, and spiral galaxies often contain singularities — another word for “black hole” — somewhere near the center. Hubble’s surveys of disc galaxies aim to explore the relationship between these black holes and their local galaxies.